Howdy folks, the name’s Norcross. I’m a WordPress developer in Tampa, FL. Since this a family friendly place, I’ll tell you to read my twitter bio. Should tell ya everything you need to know about me.

Look, someone had to say it. So I thought I’d be a team player and be the one who said it. While it’s no secret that many people have a general disdain for SEO’s in general, the guy (or gal) writing the code for that new niche website you’re getting ready to launch probably hates your guts. OK, maybe hate is a bit strong. But they almost all think you’re probably a fraud and cringe when they receive any form of communication from you.

Stings a bit, doesn’t it. Well, the truth hurts. Now, before you start blasting me in the comments, let me tell you why that’s the case. Because I’ll be the first to admit that it’s not all your fault. Just most of it.

1. Many self-proclaimed “experts” are clueless, or worse yet dangerous

True story: I was building a site for a local chain of yoga studios. Their main goal was to have the ability to “personalize” each studio location, since many had different class offerings and other unique things about them (for instance, one had child care available). The site had a pretty detailed page structure and a blog in addition to these “location” pages. So I spent quite a bit of time building out custom admin panels in WordPress so it would be easy for the client to add new studios as they opened. The site was built, the content got entered, and all was well in the universe…until the SEO “expert” they met the previous week showed up. He logged into the site and began to install plugins. Not keyword research, or even see what other sites in the space were doing. Nope, just installed plugins. Mind you, I had already incorporated most of the functionality he was looking for into the theme itself, and I used the Thesis framework which provided all the options they were looking for. He then began to rebuild the home page because it wasn’t “socially optimized” (is that even a thing?) and added icons, feeds, and god knows what else. Oh, and he broke the site by messing with a pretty important function. All of this was done in the course of 1 hour, and it took me 4 to figure out what he had done and then fix it. Which brings me to my second point…

2. Most clients are even MORE clueless

I do a decent bit of business working with existing sites. Configuration, code audits, custom plugins, etc. I get at least 2 people a week contacting me, asking to “SEO” their site. Fortunately my assistant knows how to respond to these requests, since my gut reaction would be to mention that SEO is not a verb and thus I am incapable of performing the requested service. (That’s the nicest version of that response, trust me.). I’ve just as many clients do the same thing as Johnny SEO did to the yoga site, then freak out wondering what I did to break their site. Just about every client asks if I’ll be building with SEO in mind. Honestly? I don’t. I also don’t blatantly do things I know are wrong. But I tell clients I’m not an SEO professional and if it’s something important, I have folks I recommend they speak with. It’s the best I can do. It’s an honest answer to a complicated question. I also tell them that a good SEO is expensive, so if they can’t afford a good one, wait until they can.

3. Lack of immediate results, concise goals, and no clear right and wrong

This one is just as much the developer’s problem as it is the SEO’s. You have to remember, most developers didn’t choose the profession because of their social skills or affinity for the general public. I write code so I don’t have to talk to people. And in my peaceful little world, things either work or they don’t. Period. While I can always strive to make my code cleaner, leaner, faster, and flexible, at the end of the day it either produces the expected result or it errors out. 1 + 1 = 2 every time, ya know? And if it breaks, it usually breaks immediately, and it’s obvious. If 1 + 1 = 7, I know I have a problem. Now your SEO plan involves six months, multiple platforms, link buildi….I’ve probably stopped listening at this point, unless it involved bacon earlier. I can get behind a bacon-focused effort. What I can’t get behind is a lot of high-level esoteric ideas that have no defined goals. I can whip up all the chewy schema-dusted meta fields and rel tags you’d ever want, but I haven’t the first clue as to WHY these matter, and if they’re even done correctly. The rules constantly change. As Michael Martinez wrote the other day, most SEO experiments are invalid, anyways. What else is invalid? Your argument, probably. I’m very much a “tell me what you want, and I’ll build it” sort of developer. I’m sure your “vision” is very inspiring, I probably don’t care much about your hopes and dreams outside of how it pertains to me building the damn thing. Clients know they need to be on the web, and they’ve got folks telling them that the {insert next big thing here} is critical to their success and they damn well better have it integrated. So before you know it they have 10 separate platforms coming and going with no clear goals or expected outcomes. Hell, they don’t even know how most of them work. But they’re so afraid that they’ll miss out of something that they force-feed a mess of social buttons and cross posting that makes everyone….well….hate them. And no one wants to be hated, do they?

Now I’m not here to piss in your corn flakes. I get the fact that part of my job security is dependent on y’all making the web better. Easier to find things and all that jazz. But can we stop with the circle jerk and tell people what you’re actually DOING? Gimme a damn flow chart or something. I don’t want to know all the deep dark secrets, but hell if I can’t be allowed to even know what I’m doing a day before you ask. Oh, and if you’re hired to work on one of the sites I build, ask before you start installing things. 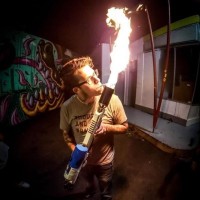 About the Author
Andrew Norcross

Beneath the colorfully tattooed skin and lanky frame beats the heart of a competitor, a guy whose eclectic background as code geek, athlete and punk-scene lifer has coalesced into a fiercely creative, independent and energetic methodology. He knows the languages. He’s a digital alchemist; Norcross has thought of the things the clients haven’t, because – all together now – that’s his job.

Coming soon: Where and When to Find Us

on May 9 by Emily Cote

Want to see more of Outspoken Media? Here’s where we will be hanging out at in the coming months. We’re…

Explaining Your SEO Job To Your Parents [video]

on Dec 5 by Lisa Barone

It’s that time! Thanksgiving has passed and the winter holidays are right around the corner. While this is typically a…